A Wild Journey: From Coma to World Title 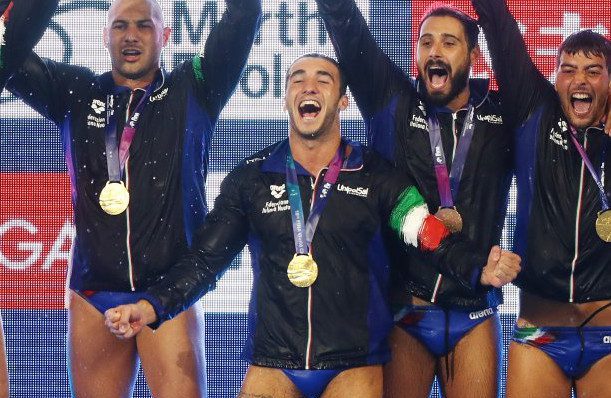 Italy has 13 heroes: 13 water polo players who won the gold medal at the 18th FINA World Championships in Gwangju. However, one of them deserves special honors. Edoardo Di Somma suffered multiple fractures in a traffic accident in 2014. He was in a coma, and doctors told him that he couldn’t play water polo anymore. But, five years later he reached the world title. Italian website “Waterpolo Development World” published an interview with Di Somma about his comeback and transformation. This is an adapted version of it.

It is September of 2014. An 18-year-old boy cries on the edge of the “Vassallo” pool in Bogliasco. He is Rari Nantes Bogliasco’s water polo player. A few months ago, in June, he risked his life with a teammate in a scooter accident. After the collision, they were taken to the hospital. The boy’s friend – Giacomo Cocchiere – got out with a broken leg while the driver of the other vehicle died from the wounds.

The boy was kept in a medically induced coma in San Martino Hospital. He suffered multiple fractures. After waking up from coma, he received the shocking news from the doctors: “There is nothing to do, no more sports at a competitive level for you”.

Flash forward to 2019, July 27. We are in Gwangju at Nambu University Arena pool: the boy grew up; he is now 23 years old. He can’t stop smiling because he has just become the world champion with the Italian national team. That boy is Edoardo Di Somma.

“We must never stop dreaming – he says – I was told that I had to finish up with the sport, but 5 years and 55 days after waking up from coma I won the World Championships.”

Edoardo counts each day. He passed through moments of pain, fear, disillusionment, hope, commitment from the moment of the impact on the scooter to the one in which he has put the medal around his neck. And above all, he spent a lot of efforts.

The emotional heritage that Di Somma brought into the pool he transferred in every stroke. And that was probably decisive for winning the gold.

“When I looked at the medal I experienced a series of flashbacks. I saw myself the first time I jumped into the water after the accident: I couldn’t even swim backstroke. I felt a tremendous pain in my pelvis. I drowned. I cried on the edge of the pool.”

But, Di Somma didn’t give up.

“I slowly returned to swimming with the help of osteopath Simone Rigalza and physiotherapists like Enzo Giovinazzo. Late in October, I started to play again. I must also thank orthopedist Federico Santolini. I will give him a cap that I wore in Gwangju. When I think about it I get excited. It is almost unbelievable what has happened to me. But the real winner is the one who never gives up”.

At the age of 18, he chose to swim against the tide, guided by his passion for water polo. He has already infected his brothers Roman and Alessandro by this passion. He managed to become firstly a player, then a member of the national team and finally, the world champion.

He says that a lot of people believed that he could return to water polo, but:

“I also met many who didn’t think I would be back in top form. I lived with the pain. I still have to be careful with my body. But I did it, even changing as a player “.

“I did it to reach a higher level. There were many strikers stronger than me and I realized that I have to do something different. Two years ago, Gu Baldineti (Sport Management head coach) proposed the change, considering my strength and resistance.”

After Baldineti’s suggestion, Di Somma changed the role in the team, he became the defensive player.

“I won the gold thanks to Baldineti’s intuition. The new role came well. Later, in the national team, Alessandro Campagna saw that I could play like that and he started to consider me as a defender. I’m very happy with the role that I found. I didn’t score a goal at the World Championships, but I don’t care. If I had finished all the games with 3 fouls, I would’ve been happy. Listening to the national anthem on the podium with the medal around my neck and then diving back into the water with my teammates to celebrate were the best moments of the World Championships. “

Di Somma naturally hopes that he can repeat the moments of joy, which he experienced in Gwangju. Perhaps it will happen on a podium with five circles behind it. “I’m young. In front of me is a long career. My aim is to be among the 11 at the next Olympics. One thing is certain: if I play well, Campagna will call me.”

After a big success in South Korea and a celebration in Italy, Di Somma returned to Asia, to spend a vacation in Thailand. Next season, he will play for Pro Recco, as he returned to Genoa from Sport Management.

There Could Be A Catastrophe in the Sport
Mediterranean Cup: Hungary Takes Gold