BENU Hungarian Cup Final4: Ferencváros and Miskolc will meet in the final! 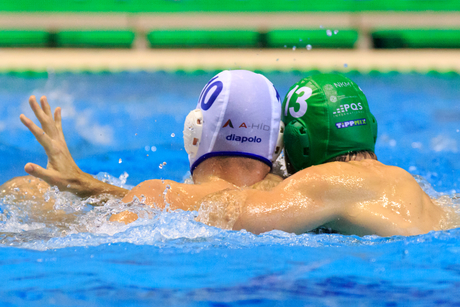 The Hungarian Cup Final4 started in Császár-Komjádi Sports Swimming Pool with the semifinals on Saturday. Ferencváros won the battle of two unbeaten team, while Miskolc won against BVSC to advance to Sunday’s final.

In the Hungarian National League both teams are unbeaten in their respective groups, so this semifinal was considered to be a final ahead of time. OSC started the game better, but after 2-0 Ferencváros scored seven out of nine – four from captain Dénes Varga – to take a commanding 3-goal lead.

OSC started the second half with 2 goals as well, but they only scored once more in the remainder of the game thanks to some great blocks from Fradi players and some huge saves from Soma Vogel. The green-whites scored the last four out of five to add on to their lead and ultimately won 11-7.

Neither team could separate from the other in the first half, but mostly BVSC had the one-goal lead and the Miskolc-based squad played catch-up. Ognjen Stojanovic was the best player in the pool as he scored three times in the first half alone – and another in the second half – for MVLC. 5-5 was on the scoreboard at halftime.

As the sides turned Miskolc took on the role of the leader, but BVSC always had an answer up until the last score. It was a real thriller in the last seconds, but MLVC managed to keep the Budapest-based team from scoring on the final attacks. Miskolc advanced to the final where they will meet Ferencváros.

Everybody gets into the pool!
VIDEO – Soma Vogel and Kristóf Csoma reviews the Hungarian Cup semifinals