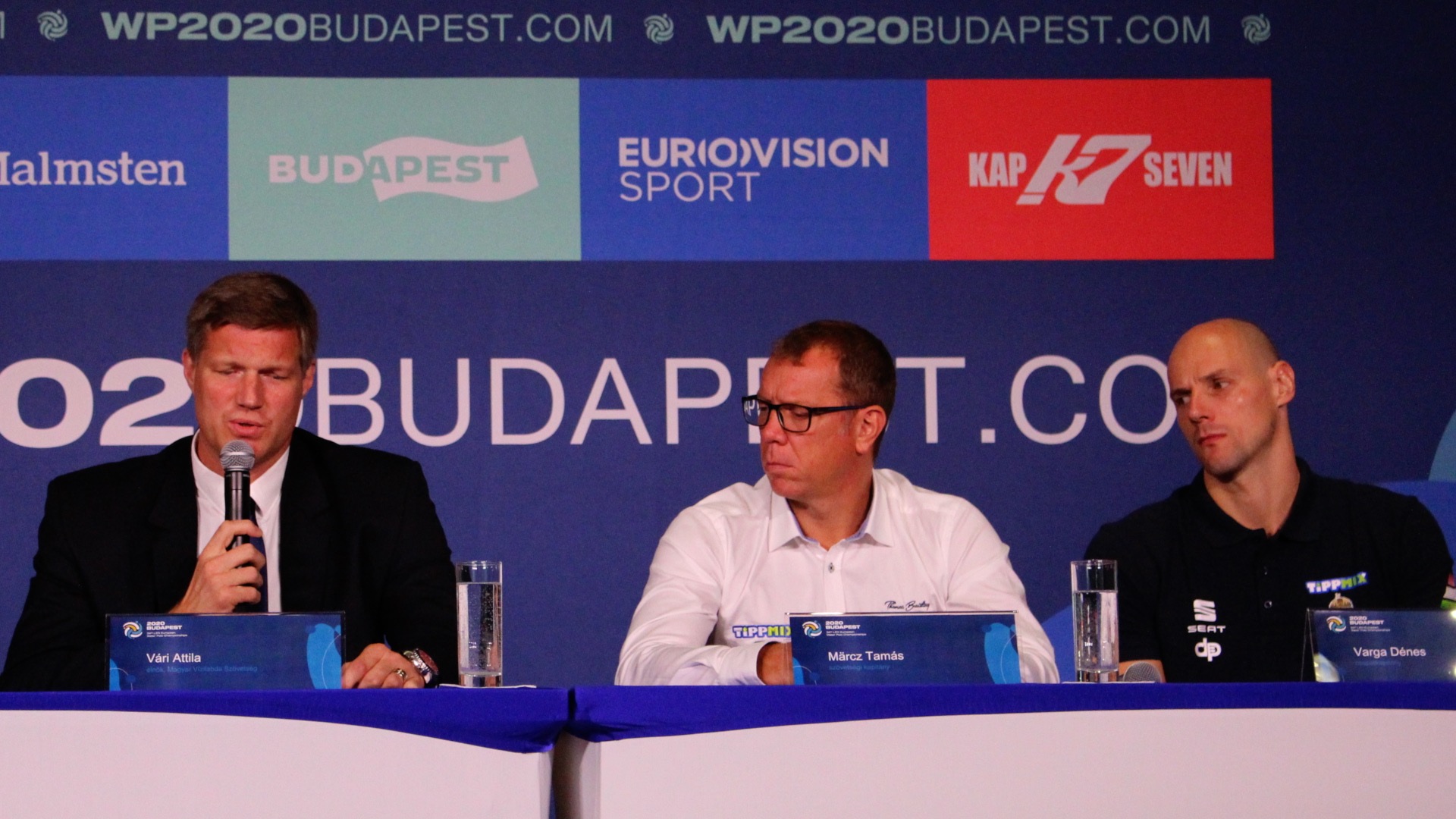 The 34th LEN European Water Polo Championships will be in Duna Aréna, Budapest from 12 to 26 of January 2020. The Hungarian Water Polo Federation held its press conference today. It was announced that the draw will be on 22 October, and that it is possible to purchase tickets on the eventim.hu website.

At the tournament’s location, in Duna Aréna, Attila Vári, President of the Hungarian Water Polo Federation (MLVSZ), has announced that the federation is now working with the Hungarian Association of International Children’s Emergency Services (Nemzetközi Gyermekmentő Szolgálat Magyar Egyesület).

“It is such a great feeling to talk about the European Championships. It is important to start promoting it; tickets are already on sale. There is a serious interest in the event both internationally and nationally. This is not surprising because we are talking about  a big event before the Olympics, which we could consider as a pre-Olympic competition. It is important to show young people and fans on home grounds and at the European Championships what international sport means. It also has a professional, sports diplomatic and social responsibility. In cooperation with the Hungarian Association of International Children’s Emergency Services, we can show everyone that such events are not just about sport. We thank the Hungarian government for sponsoring this event,” said Mr. Vári.

He also added that they are schedule organizing the event, everything is on track, and that they are continuously in touch with LEN. There are still some qualification rounds left, but on 22 October, there will be a draw. The ticket prices are calculated the way that many people have the chance to watch the matches – a ticket for the preliminary rounds starts from 1490 HUF (~ 4.50 EUR) and the for the finals the cost starts from 5490 HUF (~ 16 EUR).

„Attila Vári has mentioned an important word several times. This is social responsibilty. This is important because successful people outflank children who probably have a lesser chance of becoming successful. This event is a chance for them to gain experiences while collaborating together,” stated Péter Harrach, Vice President of the Hungarian Association of International Children’s Emergency Services.

He believes that the European Championships will be an exemplary event to many other sports federation, and that many others will join the movement. During the two-week tournament, many children will get the opportunity to attend the matches and cheer on the teams.

Both the men’s and women’s head coaches, Tamás Märcz and Attila Bíró were at the press conference. They both said that the road to the championships will not be easy as their schedules are packed. A few days before the championships start, the teams will have training camps and international tournaments to test themselves. Rita Keszthelyi, Edina Gangl from the women’s team, and Dénes Varga, Szilárd Jansik, Zoltán Pohl from the men’s team all agreed with their head coaches’ statement that the most important thing is to get quotas for the 2020 Olympics in Tokyo. In Budapest, only the winners can earn a quota, so winning the European Championships seems “easiest” way. Since the Spanish women’s team, the Serbian, Italian and Spanish men’s teams have their quotas, their performances will not be in consideration when giving out the quotas in Budapest.